I have to admit, some days I feel a little self-conscious. Sometimes even embarrassed.

I have this furtive need to “lay low” because maybe, just maybe, people who I know might hate me because my life is seriously…

It’s a strange feeling. And it feels odd writing it out loud. I can hear the Critic’s voice saying, “Are you for real? You think your life is so wonderful the common folk are all hovering about in a jealous passion? Get a grip!” And while I reach for a grip, the Dreamer replies, “I honestly don’t believe there is a line of people standing around wishing they were me, but it seems a bit curious that there isn’t.” 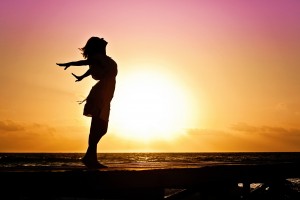 Like today. I felt the sun on my bare skin. I had hot sand shimmer sensuously between my toes. I listened to surf for hours, with my eyes closed, so I could feel my body moving up and down in imaginary collusion with the tide. I drank coffee with vanilla and watched pelicans stick their ridiculously long beaks under their armpit in an awkward dab. I laughed until I almost peed trying to stern a kayak into the dock with my Sergeant Sixteen-year-old barking directions at me from the bow. And right now, as my fingers glide with precision over a cool slick keyboard, I can feel the residual warmth of a lack of reapplication under my cheekbones.

It’s all so dazzling.

Yet, as I read over that last paragraph I realize I could also write it this way.

Like today. The wind was so persistent that even the sun did little to warm my frozen toes as they sat drenched in the bottom of a kayak. I had to pee so badly that the sound of the ocean was a painful reminder of the misery of my overstuffed bladder. I forgot to put sunscreen back on and no one reminded me, even though my whole family was there and someone probably should have cared enough to do so, so now I have a sunburned face and will probably get skin cancer and have a big crater on the side of my face that people will gawk at as they walk by. And speaking of big craters on your face, I still can’t figure out why my eyes have been horribly bloodshot for the past six weeks as I am not a pothead and Google is terribly unsympathetic in diagnosing conditions because along with the pain I have been experiencing in my finger and toe joints, red eyes can sometimes be a symptom of rheumatoid arthritis. Which I wouldn’t know if there wasn’t an internet and free Wifi everywhere you go.

It’s all so wearying.

And so it goes. Time after time. My Critic and my Dreamer cantankerously battling over every day interpretations, as I sit on the sidelines with my Jungian collective, chuckling with Trickster joy as it dawns on me that maybe I think my life is so amazing simply because it is mine. Like when you think your red-wrinkled, vernix-smeared newborn is beautiful. And she is. Because she’s yours.

I’m no more or no less than any other human being on the planet. Cool things happen to me, and pathetic things happen to me. What makes my life beautiful has way more to do with the conversations between my inner voices than what actually transpires on the daily.

See things that others overlook. Uncover wonder and glory. Live with unbridled power and magnitude. Dig deeper into compassion and care and healing and teaching and writing.

And I nod in trepidation and pull the covers back over my head because I have a million and one dreams that haven’t been realized. Dreams that I am still a little too scared to out. They hide like sand crabs, bubbles visible on the surface, worried that the light of day will be the death of them.

And, there in the dark, under the covers, the Critic likes to whisper, “Sure you can try that fanciful idea, that bit of foolish valor. But you’ll only get a C+ or a B at best. You’ll be average. Average with a capital A.”

(Insert emoji of one cringing in terror.)

To say my Critic is very protective of my heart would be to put it mildly. She is desperate to save me from the peril of mediocrity. She does so by suggesting that I don’t even hazard a step toward the edge of the cliff. And while my Dreamer valiantly pokes and prods, nudges and encourages my awakening dreams, my Critic slides in like a silent sheep dog and tucks those little meandering ideas safely back into the barn.

I used to think that the way to deal with this was to try to out logic my Critic, demolish my Critic, ignore my Critic, hate my Critic. But I’ve discovered that my Critic isn’t trying to destroy me. My Critic is trying to protect me from sensations that are so unbearably uncomfortable.

She’s just a little sheep dog trying to get me off the wide open pasture before I get struck by lightning.

So instead of hating my Critic, I’m learning to thank her for being such a great governor of my dream engine. For offering an opposing perspective and working to save my heart from total ruin.

But if you want to know the truth, I’m pouring all my campaign dollars into the Dreamer’s party. I am ferociously backing her while genteelly acknowledging the Critic’s harangue. And it is grassroots work, because supporting a Dreamer isn’t for the faint-hearted. It isn’t for the lackadaisical. It isn’t for the lottery ticket holders.

Dreaming is for the brave doers. The visionaries. The persistent ones.

You house a Dreamer.

And to take good care of your Dreamer you must point your ship in the direction of your calling and start rowing like mad. All the while holding on to the hope that regardless of where and when life ends, whether you’ve written a New York Times best seller or only a smattering of debris along the side of the road, whether you’ve traveled the world or sat on your own front porch, if the bow of your ship is pointing in the direction of your heart, your life will have been more than enough. No matter what the Critic drones.

The magic of my Dreamer lies in this endless persistence. In the discipline of doing the things I love, even when I’m not so good at them yet. In getting a blog post done, even if it’s more appropriate for the scrap heap. In agreeing to speak somewhere even though I could recommend a dozen more talented and educated personalities. In attempting to bike up a steep hill even though I know I’m going to have to get off half way up and push. In maybe, just maybe, signing up for that dance class because dancing is the most glorious form of art.

While all along my Critic reminds my Dreamer of my two left feet and extraordinarily tight hamstrings.

And my Dreamer pulls up a chair, hands the Critic a cup of Earl Gray and says, “Thanks for doing so much work preparing me for disappointment. Working to keep me safe from discomfort. Reminding me not to be Pollyanna. You take your job so seriously, and I am grateful for you. Would you mind for one moment looking out upon my vista and sipping tea in silence with me? For I truly believe you want to go with me. That our hearts are bent in the same direction. You are just ever so practical.” 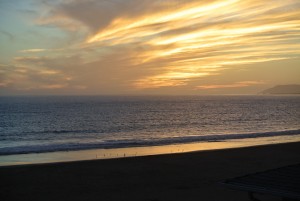 And so they sit. Facing the shoreline. Feeling the fear of the raging waves, and the joy of the setting sun.

My Dreamer giggles in ecstasy. And for a moment, my Critic cradles the word,

*****Continue to follow your dreams and click here to read what my dear friend Megan has to say about dreaming.*****