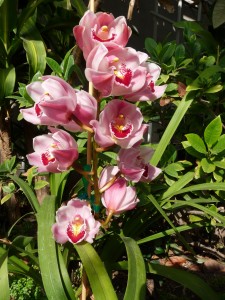 I always keep an orchid on my bathroom vanity because it gives me a glow of hope on those early mornings that my cold little feet would prefer to be back in bed. Sometimes they are white, sometimes fushia, sometimes yellow, and when that little orchid’s blooms wither and fade, I toss it in the trash can, run out to Trader Joes and purchase another.

My husband, however, has different ideas. I call him a hoarder, but he happens to love to save things. Containers, boxes, old t-shirts. And apparently old orchids, because about 5 years ago, he planted the stub of this flower into the ground right outside our back door.

And yes, I mocked him. For 5 years I looked at these green leaves that bore no fruit and said, “It’s not going to bloom again.” He said, “Sometimes they do.” I nodded in gracious agreement, but the likelihood that anything colorful and wonderful was going to bloom forth from them ever again seemed minimal, in my not so humble opinion. It would live out the remainder of its days as a bunch of pathetic little green leaves.

Well, one day about 3 weeks ago, Danny came and found me like a little puppy eager to play catch and made me walk outside the back door. There right beside our doorstep was a flower stem with about 10 tiny little buds growing on it. He fashioned a “CAUTION” sign out of cardboard and toothpicks and stuck it into the ground right next to the flower…ostensibly to warn the cats off?? I was going to tell him that I didn’t think they could read, but given my track record of misplaced disbelief, I held my tongue.

My beautiful orchid is a reminder to me today to notice everyone and everything. Not just the people in the world and in my life who are flowering, but the ones who to my eyes seem to be dormant or not so spectacular. God works deeply, he works mysteriously and he sometimes works hiddenly. I want to be excited about his work, even when the evidence is not on the surface. I want to believe even before the evidence is seen. I want to be a caution sign around those who are stretching their wings and preparing to take flight. And I want to be a celebrator of those who are soaring after years of darkness, trial or tribulation.

I want to be someone who never says never.