I hope you dance

If one were to evaluate the quality of my week in relationship to the quality of other weeks of my life, this week would suffer greatly in comparison. Every cell in my body is screaming from exhaustion, even though I have done nothing physically rigorous this week other than stumble out of bed and attempt to pack a turkey sandwich every morning. I think the physical cries of mutiny are stemming from emotional cyclones that seem to spring up and touch down on every single empathic nerve ending in my soul.

I started this week by dropping my precious little girl off at school in a wheelchair. After only an hour at school, she spent five hours at Children’s Hospital LA with her dad at the end of which she knew no more about her physical condition than when she arrived.

Her wrist, which she broke three months ago is not healing, and the avascular necrosis is increasing. And when the best orthopedic hand surgeon at CHLA says that if she goes in there she could “screw it up even more” the light at the end of the tunnel starts flickering a bit.

Not to mention the fact that there were three other doctors fascinated by Rachel’s lower extremities, not because they are amazing legs (although they are), but because they were trying to figure out whether or not they need to insert screws in her left one to stabilize her high ankle sprain that happened last Friday when she decided to play a little one-armed volleyball without ankle braces. About as wise a move as a catcher not wearing a cup.

If I had been there I would have pulled out my best Sebastian the crab impersonation and just begged someone to “nail that girl’s fins to the floor!”

The rest of the week was met with an onslaught of pain as I sat in the counseling office with my beloved clients, many with suicidal ideation, recent loss, or struggling to survive a week in which every one of their own trauma triggers was activated. Two good friends were also going through horrible situations within their family, pain from divorce and retaliation and retribution and abandonment. Dads beating up moms, leaving their kids, wiping out bank accounts and casually informing the broken-hearted, oh yeah, I haven’t paid the mortgage for the last 6 months either.

Not to mention I had to trade Adrian Peterson. Come on men, what are you thinking?

Then last night I got a phone call from one of my office mates who told me that my dearest colleague who has been fighting cancer with the ferocity of a lion and the gentleness of a dove, someone whose faith inspires me to squeeze every ounce of life out of every day, collapsed during a client session and is in the hospital undergoing radiation to get the swelling in his lymph nodes under control. I can’t say that hearing the words swollen lymph nodes in connection to cancer does anything to perk me up.

Add to all of this emotional pain, a week of extreme Southern California heat, brutal news images of yet another ISIS crucifixion, the four dead and nameless animals I had to drive by who never made it to the other side, as well as the sudden curse of almost every light bulb in my house deciding to blow at the same time, and I found myself waking up on this Friday morning in a very dark place. Literally.

By 7:20 a.m. my busted up daughter was being wheeled into school for the 5th day in a row. And by 8:10 my son and I were having a passionate argument because I was unable to engage in an intellectual conversation about the aerodynamics of a German U-boat, and he felt I didn’t care about him at all. Probably because in the water it’s hydrodynamics instead of aerodynamics and what idiot mother can’t at least figure out that a U-boat doesn’t fly?

So I decided to dance.

I am a terrible dancer. I have these long limbs that move in very strange directions. I can hear a beat, but by the time it translates into body mechanics the next beat has arrived and retired. But I picked up my keys and a towel anyway. And I drove to the gym.

It was Zumba time. 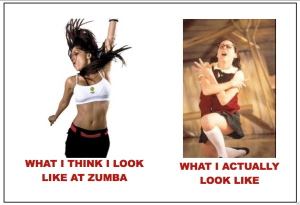 Now, if you aren’t a Temple City resident, you may not know that I am the only blonde person in Temple City. I am also the only person over 5’7”. We are a very Chinese town. And Zumba is a very Latin dance.

So I enter with my fully broken heart and stumble to a place in the back of the room realizing that there is no place for inconspicuousness because the mirrors find my wild blonde hair and refract it above the crowd in every single direction.

But then the music starts and the tiny, barely 5’ barely 100lb instructor starts moving her hips in the most glorious way. And the Asian crowd starts hooting and hollering and the Spanish lyrics fill the space between, and I am caught in this multi-cultural glory and I start moving anyway.

And then something like a Holy Moment happened. All of us, most of us more uncoordinated than an elephant in the Russian ballet, started loosening off the chains of life.

Hips were rolling in all sorts of directions. Mambos were exchanged for sambas and who the hell cared.

Before I knew it I was laughing so hard. And I was crying even harder. And I was dancing like no one was watching. (Even though in retrospect I’m afraid everyone was.) Within fifteen minutes I was dripping in sweat and had collided multiple times with two tiny ladies next to me. (Who incidently got the Holy Spirit contagion and were laughing hysterically along with me.)

I don’t know what it was about today and that silly little group fitness room, but maybe everyone in that class had also had a “no lightbulb” week, had seen too much about ISIS, heard too much about abusive football players, or were exhausted by death and cancer and broken bodies. What I do know is that there was hilarity solidarity and whatever ugliness was out there, we were here and we were dancing like mad, and all our hurt and exhaustion and pain and surrender was moving out and through and beyond in the cacophony of movement and sound and heat and passion.

And I could understand why Lee Ann Womack hoped I danced.

So the next time the world threatens to pull you under water, here’s what I hope for you:

I hope you never lose your sense of wonder.

That you get your fill to eat, but always keep that hunger.

That you never take one single breath for granted.

That love never leaves you empty-handed.

I hope you still feel small when you stand beside the ocean.

When one door closes, I hope one more opens.

I pray you always give faith a fighting chance and that when you get the choice to sit it out or dance.

I hope you dance.