My Diamonds on Wheels 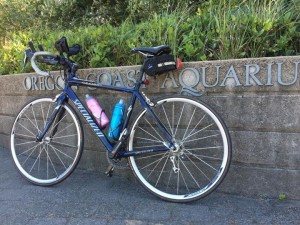 About a decade ago, my husband was out on a diamond hunt with a friend who was looking for a new wedding ring for his wife. That adventure for my husband was similar to when he goes grocery shopping on an empty stomach. He sees delicious things, and he puts them in his cart. Which is what he did in the jewelry district. When he arrived home, there was a little black box in his pocket which contained two beautiful ½ carat stones that would glisten lovely in my ear lobes.

I tried them on. I ohhhed and ahhhed in the mirror. I lavished him with kisses. But I wasn’t feeling it in my heart. They were beautiful shiny things. But I couldn’t really do much with them, except toss my head around to catch the light, and tossing your head when you have short hair is a really strange and awkward thing. More like you are having a seizure than filming a Paul Mitchell commercial.

I drummed up courage over the next few days and finally approached him with tender caution. “Honey, I love you, and these earrings were a beautiful testimony to the depth of your passion and love for me. But I was wondering, could we take them back and get a bicycle instead? One with a carbon fiber frame (diamonds are made from carbon too, you know), and we could attach aerobars for my races, and I would be so fast and furious and free.”

My darling husband looked at me like it was Christmas Day. And in a heartbeat the earrings were returned, and we found ourselves in a bike shop measuring me for a Specialized Roubaix. She was a deep dark ocean blue. 54 cm frame. Complete with a granny gear triple crank set and Shimano Ultegra components. I named her Sapphire.  She was the last piece of jewelry I would ever need. 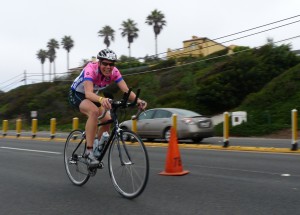 Over the next 10 years Sapphire would keep me company on many mornings where I found it hard to wake up. When the pressure of working full time and wanting to be a very present mommy were colliding. When I needed the wind in my face to dry the tears in my eyes. She would take me down to Seal Beach for a burger at the River’s End Café. She would take me up to the top of Chantry, or crank out time trials whipping along the crest of the Santa Fe Dam. I would chase coyotes down the street and giggle under the raining jacaranda blossoms in late spring in Pasadena. Once at the very last minute, she dashed me off on an anniversary trip to San Diego and down to the TJ border, just to say we did it. We’ve ridden across the Golden Gate Bridge, visited lighthouses along the Oregon Coast, and braved the Seven Devils Road. She even helped me win my age division at my very first (and so far last) half-ironman. We’ve raced together in Carpinteria, Palm Springs, Long Beach, Malibu, Hermosa and Bonelli Park. She is feather light, aero fast, and as beautiful as any diamond.

This summer, while Dan and Sapphire and I were off on our 20th anniversary trip cycling down the Oregon coast, we got the kind of phone call you never want to get. My brother in law–who was staying at our house while we were gone—called to tell us that when he got home from the beach that afternoon our house had been ransacked. Files had been flung all over the office. Picture frames yanked off the wall with the backing ripped off. Clothes all over the bedroom floors. And all my jewelry was gone.

I was stunned. My mind whipped through all the memories that had been in that big box of treasures. Gifts from friends, gifts from Dan, my wedding necklace, sapphires he had brought home from Sri Lanka, an opal ring I had bought in Bethlehem when I was 13, a small gold cross necklace given to me by one of my best friends before she moved out of state 17 years ago. The only thing that WASN’T in that jewelry box was the two diamond earrings that I was riding down the coast. As devastated as I was, I had a bit of a chuckle thinking that I had won with Sapphire. My diamonds were soaring along the rock-studded coast line with me.

I thought about this blog post a lot while I was riding that week. I would rapidly shift between a sense of anguish over the violation of my house and my property back home, and the elation and joy I felt actually being free of material possessions and only needing a helmet, riding gloves and clips. I thought about how having expensive things was such a burden, and I thought about how the memories were what I missed most. I decided I would write something about each piece of jewelry I had lost. My “Jewelry Eulogies” and at the end I would write this piece. This piece about Sapphire being my crown jewel.

I’ve been looking at photos from that Oregon trip quite frequently lately. Because that was the last time I got to ride Sapphire. Two weeks ago she was viciously ripped off a bike rack on the front of a bus in LA by someone who ditched his own crapper bike at a red light and took off on mine before my husband (who was riding her to work that day) could get off the bus and stop him. I think telling me she was gone was one of the hardest thing my Daniel has ever had to do.

I screamed like the people do on Grey’s Anatomy when they get word that someone didn’t survive surgery. I slept for hours on end. I couldn’t think clearly. Then the manic crept in and I began to research how to find stolen bikes. I perused Craig’s list. We filed a police report. We looked for the video footage from the front of the bus. The data was not good. One source said that approximately 2.4% of stolen bikes are ever recovered. Still, I would drive up and down the road near where she was taken, plotting my best James Bond moves if I saw anyone riding her.

I actually cried wondering if she was being taken care of. Did they strip her parts? Were they lubing the chain? Did she get left out in the rain? (Then I remembered it doesn’t rain in California…but what if they were part of an international smuggling operation and she had already been thrown in a dark, dank smelling truck and hauled over the border into Canada?) My husband drug me to the bike shop saying that even though we couldn’t afford it, he couldn’t afford to see me without a bicycle. I looked at him through razor slit eyes and said with a hiss through clenched teeth, “I don’t want a new bike. I want Sapphire.”

I miss her a lot. And no matter what new ride I get, I can’t imagine that I’ll ever fall in love the same way. But I’m starting to notice that it’s taking more and more effort to hang on to my grief and my anger. I keep doing frustrating things, like looking out the window here in Montana and feeling my heart leap with joy at the fall colors and falling rain. I got a text with a picture of my daughter at homecoming and my son on his mountain bike at the top of El Prieto, and I couldn’t help but smile. I actually even printed out a photo of a new baby blue bike, and every once in a while I’ll force myself to take a peak at her. A few more tears. A few more breaths. And then I’m distracted by something beautiful again. 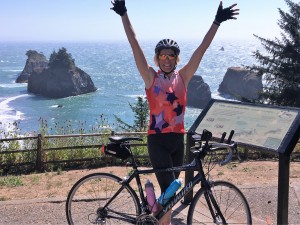 to become grateful for the 10 years we rode together. Grateful for a little more understanding about the pain of losing something you love. Grateful for friends who have taken me to lunch, bought me flowers, written me letters, just to see if I was okay. Grateful for the reminder of my humanness, my neediness, my blessings.

I’ve even started to think a lot about the people who came into my life to take things from me. And I realize that while they can take things from my home, my garage, even off the front of a bus. I don’t want to ever let them take my joy. In fact, I want to think of them with love and hope for their future, for their needs to be met in more productive ways, for whatever traumas or heartbreaks or hard knocks they have endured to be met with more love than they know what to do with.

Maybe my diamonds aren’t even something with two wheels. Maybe it’s way deeper. Maybe they are a sparkle that comes when you see signs of love, beauty, hope and comfort in the world.

I was reminded this morning of a quote I love from Viktor Frankl. “Everything can be taken from a man but one thing: the last of the human freedoms—to choose one’s attitude in any given set of circumstances, to choose one’s own way.”

My suffering is but a drop in the bucket of the depth of suffering Frankl endured and that millions more in the world are enduring right now. If I can, the only thing I want to do more than ride my bicycle down the coast is sparkle with a little diamond brilliance into the lives of others who are in pain.

And no thief can ever take that from me.