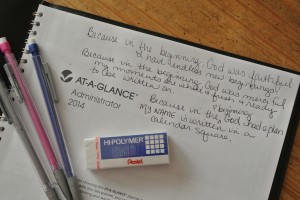 I can barely contain myself as I walk down the aisle of the office supply store looking at the number 2014 gleaming off brown leather covers. I pick up a couple and flip through them to find the one with the exact right size squares to hold all the important tasks of the upcoming year. I touch each page and inhale the smell of new paper. (And yes, I do own a smart phone that could gently remind me of everything I might possibly need to accomplish this year, but I just can’t seem to give up the tangible feel of holding my days in my own two hands.)

As I drive home with the planner sitting next to me in the passenger seat, I run my hands over the cover and dream about those large blank squares and the way I will sit down at my desk and carefully fill in the month of January. I find myself quivering in anticipation.

I’m oh so careful those first few months. I only write in .7mm mechanical pencil for legibility reasons. I make sure to test my eraser on a piece of scrap paper before I use it, because I hate the ones that leave a horrible ash-like smudge. My new calendar is a thing of beauty and precision.

Until it happens. One day, maybe mid-March or early April, I have to write something quickly and the only thing within my six foot wingspan is a pen. A permanent, no erase, pen. And then it’s over. My calendar has been tarnished. The new is gone. The event scrawled in pen inevitably gets rescheduled, and I have to **gasp** draw a line through it, or maybe even etch it out with a row of curly cues.

From there precision tumbles precariously downstream until by August I’m using the empty squares for grocery lists or the family’s Jamba Juice order, and I’m already starting to think about the fresh new January calendar and the retiring of this current calamity, which has been smeared by honey butter and twice caught in the rain of a chicken noodle soup ladle.

Kids who couldn’t wait to meet their teachers on the first day of school have to be drug out of their beds by week two. New jobs we are so excited to announce on Facebook become a string of Monday mornings, and we long for a vacation only four months in. That tangible thrill we have at the beginning of a relationship becomes a plodding along thru diapers, multiplication tables and acne medication.

Each year our calendars are besmirched with devastating loss, broken hearts, embarrassing moments, sins of selfishness and stains of pride, moments of curling in when we could have extended out.

So this year, as I opened my new crisp white 2014, I dropped my naive façade and saw the whole year unfold, and I cringed at how messy the calendar would look by September. I tried to decide if it was even worth trying to keep it in a state it could never sustain. And I started thinking about what would happen if I didn’t fake it. If I started off my calendar in the same disaster that it would eventually end up in. If I just jotted down what I needed to jot down and spent more time looking up and around than measuring pencil leads and evaluating erasers. If I hopped right into the bumble and jumble and mess of the middle.

As I was contemplating this novel thought, I noticed that my Bible was sitting next to my new calendar. I noticed that the pages of my Bible weren’t exactly crisp and pure and white. There were some underlines and some exclamation points and some accidentally bent in pages. There were sections that had been read so often the pages seemed to have a translucent sheen. And I discovered that here I had no longing for clean, crisp, white pages. I had a longing for familiarity and promise. For substance over spotless.

Closing my calendar, I opened that familiar, not-so-new book to the very beginning and read, “In the beginning, God.”

That was as far as I got because it seemed an appropriate New Year’s scripture.

“In the beginning, God.”

In the beginning, God, in the middle, God, at the end, God.

And I wondered, could I do that with my calendar this year? Can I feel him in the beginning of the day when my muscles are weary and my brain is cloudy? Can I find him when I’m in the middle of a muddle, wondering how to endure through a season of loss and loneliness, of muddy mysteries, of unsure endings? Can I have faith that the ending will be perfect–exactly as he intends?

Yes. Because this “In the Beginning God” promises to be an “in the middle God” and a “finish line God.”

He promises that no matter how loveless your calendar may be, his steadfast love never ceases.

No matter how many permanent ink mistakes you make, his mercies never come to an end.

No matter what season you feel stuck in, your new year comes every morning.

His faithfulness is just that great.

So, written in the front of my 2014 planner are these words:

Because in the beginning, God was faithful, I have endless new beginnings.

Because in the beginning, God was merciful, my moments are white and fresh and ready to be written on.

Because in the beginning, God had a plan, my name is written in a calendar square.

The truth is, my every moment is a clean crisp calendar square. As new in December as it is in January, no matter how much chicken noodle soup it wears.

So this year I won’t try to keep January so pristine. I’ll just smile over the stains, and thank God for the pristine he has granted me straight thru to December.

Cause that’s a happy New Year!!

To make this new year even more delightful, 4 of my friends have committed to write on the same topic each month. Please take a moment and read my dear friend Allison’s words of hope as you begin this New Year! Blessings! http://www.hopefulplace.blogspot.com/