Living as a Prayer 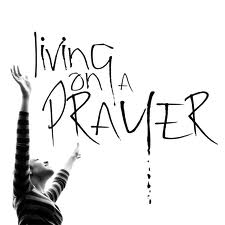 will always believe that 80s rock is the best. Probably because it reminds me of those roller coaster emotions of being a teenager. And the need to roll the windows down and scream and cry and laugh and try to drive all at the same time. Everything is so big and powerful and significant and dramatic when you’re 16. And since I was always broke as a teenager Bon Jovi’s “Living on a Prayer” was one of my favorites. I was a sucker for down on your luck romance. (Although in the Reaganomics years my very “right” family probably wouldn’t have condoned the fact that poor Tommy’s union had gone on strike…therefore there was probably general consensus that it was his own fault that he was down on his luck and his prayers probably wouldn’t be answered. Although, really, I never knew the general consensus of my family because if they had ever found out I was even listening to 80s rock I would have been disowned because Chopin didn’t write it, but that’s a story for another time.) In my car, I controlled the radio. And to me, the idea of taking someone’s hand and living on a prayer was incredibly romantic, and not far from reality.

I’m still only ½ way there, but I have continued to work to have my life be founded on prayer. To take God’s hand and live in that desperation of faith. In fact, lately I’ve been having this radical thought that maybe praying isn’t something you do, but it’s a way you are. That my life could be a prayer rather than prayer simply being part of my life.

I find that I no longer think of prayer as a list of people or requests, diagnosis or redemptions. It is a communion, a constant communion. I carry my beloved ones in my heart—like the priests who wore the names of the tribes of Israel on their chest plate—and whenever I enter into the presence of the Lord, they all go with me. And he sees me and he sees them and he knows all our needs. All I have to do is linger there and expose my heart and all is wrapped in his love and his promise. When I abide in him, all those I love are resting at his feet with me in a wordless conversation full of thanksgiving, mercy, promise and hope.

Thinking of my life as a prayer brings up all kinds of curious thoughts. I wonder if the people I walk by, absolute strangers, can feel the interceding of the Holy Spirit. I wonder if I truly am a sweet incense. If my daily words to others, words as simple as, “you are such a joy in my life” could breathe love, could communicate his love.

What if communion didn’t stop at the doors of the church or the edge of my living room? What if my thoughts were constantly of Him as His are of me? (Which they’re not, but what if they were?)

What if the One who spoke and I existed invites me to speak because He exists. If my living prayer brings His presence, which brings light and hope and encouragement and strength to the weary and the heartbroken.

When I’m living as a prayer I can both be a lighthouse and experience a lightness of being. All anxieties are wiped away. Nothing else matters but Love, and that’s a lot.

I guess the bottom line is, I don’t want my life simply to be defined by prayer. I’d like it to be consumed by prayer.