Seatbelts vs Airbags: My reflections on parenting

I’ve been in a particularly curious season of childrearing and childworking. I have two kids at home with a lot of hormones, facing violently rapid brain development and occasional existential angst, and I have about 520 kids at work, many of whom are also in the throes of puberty and making some really wacky, seemingly boneheaded decisions. Or maybe not decisions at all. Maybe just accidental falling off of cliffs because it seemed exciting to see the view from a free fall perspective. And I’m left in the occupational hazard of both attempting to figure out what the heck I’m doing in my own life, while trying to posture myself as an educated professional who is able to assist other parents who are trying to figure out if their baby birds are ready to launch, or if they are just going to fall out of the tree and get eaten by a cat.

So I do what I always do when I’m befuddled. I pull about 269 books off my shelf and start reading voraciously. Books are soothing to me. Like listening to ocean waves, sniffing fresh lavender, or consuming a large bowl of ice cream. And anyway, the current binge did help me remember that it’s not just insanity that’s happening to pubescent teenagers, it’s actually wondrous awe.

Dan Siegel, still being part teenager himself, writes with delight about the burst of growth that happens in young brains and bodies between the ages of 12 and 24. He views adolescences “not [as] a period of being ‘crazy’ or ‘immature.’ It is an essential time of emotional intensity, social engagement and creativity” (Brainstorm, p. 4).

(Which is a positive psychology spin on what might also be expressed as heightened impulsivity, overzealous trusting of peer opinion, as well as the occasional “the world is going to end” emotional angst.)

Which is why I find it a great blessing that most parents of adolescents are–in fact–over the age of 24.

For the most part we have fairly functioning frontal lobes and can exist without the constant need for a dopamine rush (again, for the most part). As adults, we have an increased capacity to pause for thoughtful reflection. A capacity which is more limited during the adolescent years. In fact, even when an adolescent IS able to stop and pause to consider the consequences of their actions, sometimes the “fun” that might be had can tilt the balance of their decision-making (even when they are completely cognizant of the “danger” that might also be had.)

In a nutshell, this means adolescents won’t make good decisions as often as you do.

Even if they are as smart as you are.

Even if they have all the information you have.

Even if you have drilled a moral code into them 4,267 times.

So how do we survive this impossible situation? How do we instill wisdom into our offspring without shaming them into submission? How do we understand that they are up against chemistry, while also keeping in mind that their decisions can be monumentally monstrous?

By being a seat belt rather than an air bag.

See, I’m currently in the process of teaching my oldest how to drive. And when I think about someone whose diaper I was just changing, who was just spilling oatmeal all over the couch while singing Elmo’s World at the top of her lungs, now dangling keys from her hand as she strolls out of the house in her ripped jeans, aviator shades and swishing blonde pony tail, I start getting pit stains. My baby girl is behind the wheel of a deadly weapon.

And the air bag in me wants to burst out. I want to scream, “There is a car 277 yards in front of you, SLOW DOWN!” I shove my foot so far into the passenger floor board, I’m surprised I’m not Wilma Flintstone. I want to protect her with every ounce of pressure that is pent up inside of me.

But all the airbag style of parenting does is cause a lot of bruises. So, I’ve been working more on being a seat-belt kind of mom.

Because a seat-belt never has to remind the wearer of how juvenile-y inadequate they are at keeping themselves safe in a crash. 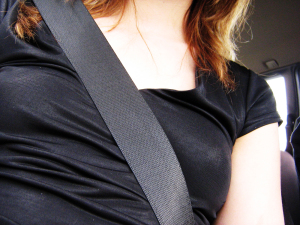 A seat-belt just wraps itself around your heart, clicks securely in place, is flexible when there is no danger, and holds tight when there is.

Seatbelts aren’t mean, but they do mean business. And, of course, sometimes we need to be the “hold tight” part of the seatbelt. Sometimes we can foresee danger ahead and sometimes there is broken trust that needs to be patched up. But instead of airbagging, “YOU’RE GROUNDED FOR LIFE,” what if we opted for seat-belt parenting and said something like this: “Since my job is to keep you safe, we’re going to keep you close to home for a while. I totally get that it will be sad and you will probably be mad at me when your friends are going out and you are staying home. But I know that you will be joining them soon and in the meantime, we’ll enjoy some fun stuff together as a family.”  (Seriously, what if grounding a child could help them remember that their family might actually be fun to hang around!?)

My teens know that they have a ways to go before they’re ready to face the world alone. And I know that they’re probably going to make a lot of mistakes, crash into a lot of immovable objects, come home with dents in their souls. But I want to be that parent who thinks first about their heart, thinks first about their emotional safety, who wraps myself around them and says, “I love you. Thank you for sharing this with me. My job is to keep you safe. We’re going to figure out how to do that together.”

Because I’m starting to realize that many children stop communicating with their parents, not because they don’t want to, but because they are frightened of their airbag reactions. Yes, they might also be wanting to avoid the consequences of “no video games” or “being grounded” or “taking away their phone.” But mostly, they want to avoid the pain of emotional disruption, of not being seen, of not being validated, of not being sure that who they are is more important than what they do.

I think it is a lifetime goal of mine to deflate my “air bag” parenting style and become more of a “seat-belt mom.” Someone who can flex when it’s safe, and someone who hugs a little tighter in times of danger. Because at my core I believe that while shame and anger may change behavior, they rarely change a heart; just like air bags might keep you safe in the moment, but they also leave you battered and bruised.

So this summer, I’m going to buckle up. Right across my precious teenage hearts.

(And remember to lay off the coffee before I give her the car keys.)