Every time I watch The Help, there is a scene that breaks me. 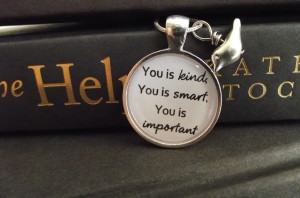 When Aibileen says goodbye to Mae Mobley. Watching little Mae say, “Don’t go, Aibee, please don’t leave,” I start welling up until the screen goes fuzzy. Aibee bends down and wraps her perfectly strong hands around Mae Mobley, tears rolling down her face and says, “Baby, baby, I need you remember everything I told you. Remember what I told you?”

And in the most delightful sing-song, Mae never misses a beat. “You is kind, you is smart, you is important.” Aibileen looks right into that precious little face and says, “That’s right, baby girl.”

Then she turns to Elizabeth and says with more power and authority than she has yet spoken throughout the movie, “You give my sweet girl a chance.” And she turns to walk out of the house.

Even writing those words I tear up. And I find myself hoping beyond hope that little Mae Mobley never forgets those words. The words of someone who believes deep down in the bottom of their soul that you are significant, that you are important, that you matter.

That deep knowing is what gives birth to hope.

I love the word hope. I thought maybe if I had another daughter I would name her Hope. There’s a simpleness to the word that belies its complexity. A strength to the word that vanquishes the plague of doubt. A wide-eyed eagerness in the word that gives it the taste of springtime. I never had that third child, but still I long every day for my life to be a purveyor of hope, to be someone who births hope into the world. To be an Aibee to a little Mae.

When I was in grad school studying psychology, we learned Erik Erikson’s stages of psychosocial development. He identified the first 18 months of life as the “trust vs mistrust” stage in which the major question is “Can I trust the people around me?” The outcome of a positive first stage of development is what Erikson called the virtue, or “inherent strength,” of hope. Hope is birthed in a little baby because of a relationship with trustworthy caregivers who attune and feed, bathe and giggle, comfort and assure. That hope lasts a lifetime. And that hope requires a relationship.

Hope cannot exist in isolation. It requires a dyad to form hope in a child, and it takes a village to instill hope in a society. Aibileen was a hope-birther in little Mae Mobley, and Skeeter was a hope-birther into Aibee when she asked her for the first time “what it feeled like to be me.” Someone decided Aibileen mattered and that her story was worth telling, and because of that her world would never be the same.

I have hope because I trust that I am not alone. And I can birth hope in someone when I remind them that they are not alone. When I smile at someone on the subway, when I’m tender toward a mom whose child is having a tantrum in the grocery store, when I show someone in L.A. that not everyone on the 405 ignores you when you have your blinker on. Every little moment of noticing, of seeing, of encouraging, of respecting is a moment in which a brick of trust is laid as a foundation for hope.

Yet hope birthed through a finite individual is finite. As beautiful as it is to have hope because of a trusting relationship with a beloved caregiver or a kind Mother Teresa or an anonymous benefactor, that hope will someday perish. I can live as a hope birther until my final breath, loving and giving and sharing and caring and doing everything humanly possible to allow people to feel safe and experience the possibility of hope, but if hope dwells only in someone’s relationship with me it is extraordinarily limited. Even the best mother, most trustworthy friend, most dedicated spouse, can only offer us a finite hope.

Infinite hope, a hope that comes from the resolution of the bigger question, “Is there someone I can trust forever?”,  requires a relationship with an infinite being, a perfect eternal being who loves and never leaves, who sees and never forsakes, who promises and never fails.  That kind of hope lasts a lifetime and beyond.

That kind of hope is Jesus. Because I trust Him, I dance daily in infinite hope. A joyous, outrageous hope that flows untethered through my body.

“And hope does not put us to shame, because God’s love has been poured out into our hearts through the Holy Spirit, who has been given to us.

That scripture reminds me that I am important, that I am significant, that I matter. Just like Mae Mobley, I can feel his strong hands wrapped around me and witness the tears flowing down his face as he asks me to please remember what he told me. That I was worth dying for.

Because of Him “I am safe, I am secure, I am important.”

Because of Him I have infinite hope.

***And speaking of hope, check out Allison’s hopefulplace.blogspot.com  for another taste of that infinite hope!***