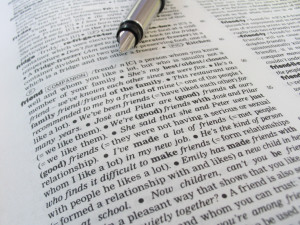 Friendships have always been a bit of a mystery to me. My parents didn’t really do the friends thing well. They had friends, but the friendships only existed as long as both parties went to the exact same church and believed the exact same thing. Mirror image was a pre-req for friendship. Or at least an imagined mirror image, because it was better simply not to know the stuff you didn’t want to know. The things that would shatter the mirror.

My parents were also cautious about my sister’s and my friendships, so cautious that even kids “in the church” weren’t always good enough. I remember how the teens in our small congregation used to gather in the back of the church to “hang” after the service, and my parents drew an imaginary line down the middle of the hall and said that my sis and I had to stay in the front half of church. Literally, the half nearest the holy podium. If someone wanted to come talk to us, they said, they could come up front. We spent many lonely hours teetering on that tightrope line, hoping one of the cool kids would move out of the huddle and come join our awkward “better-than-you” two-some.

Not that I didn’t have friends, I actually had a wild and crazy friend in high school that no one could believe I hung out with. She was the partier and I was the prude. I was drawn to her because she was alive, she was drawn to me in the hope that she could stay alive until college. I loved her, but I don’t know if I could say I loved her well or I loved her deeply. I didn’t want to know the hardships of her life, I didn’t want to know why she drank or slept with guys. I thought maybe that if I didn’t ask, I could keep her in my “front half of church” hemisphere. Looking back I wish I had gotten to know all of her. She made me laugh, and she was wise and deep and beautiful. We would drive through the Georgia hillsides together, in search of the GLHS boy’s basketball team, with Bon Jovi blaring unrecognizably through my little Datsun 510 speakers.  I have searched for her online for the last two decades, but she changed her name after high school, and I’ve never found her. I wish I had found all of her when I was 17. I wish I could have understood that friendships weren’t about mirrors but were about windows.

But that concept didn’t fit into my family’s “front half of church” child-rearing practices. A practice which left me with a lot of unanswered questions. Was I really better than everyone else, as my parents’ isolation seemed to suggest? Was the rest of the world bad and dangerous? Would there be friends out there that were “approved of?” And if so, would those friends approve of me?

That’s really the strangest thing about growing up in a cult. You become so accustomed to judging everyone around you, it’s natural to assume everyone else does the same. So you have to keep being the best at everything you do to avoid the terrifying thought that maybe you aren’t the chosen one.

I must have tried really hard because I clearly remember a girl named Buffy in 6th grade saying to me, “You think you’re hot stuff because of your religion.” I thought she was delusional. More likely she was dead on.

At 18, I went off to my small church university, where I studied the art of friendship more than anything else. Fortunately, there were a lot of other 18-year-old yellow pencils trying to do the same thing. Figure out if we were good enough and if we were hanging out with good enough people. But being out from under the eyes of mom and dad, I discovered I could step into whatever relationship seemed curious or appealing or terrifying, and those four years were truly some of the most wonderful years of my life.

Looking back I think I thought I was a good friend at 18, but now, I’m not so sure. I was still afraid a lot. Afraid that the mirror would shatter, and they would discover that I wasn’t enough or maybe worse, I’d discover that they weren’t enough. I was adolescent selfish, and egocentric, and thought more about what I was getting out of the friendship then what I was giving. I think that the “front half of the church” mentality was still a grimy deposit in my soul. I was still learning what it meant to embrace the “everything” in people, because I had been raised to rise above the muck and the mire (code for: ignoring reality.) I wanted an illusory perfection, both in myself, and in those with whom I spent my time.

Yet somehow, these friends I made in college held on to me. They loved me. They found something to relish in me. They didn’t draw a line and tell me that in order to be in their presence I had to clean up my “hot stuff” act and show up contrite in the front pew. And that did something to my soul. It began to clear away the grime of perfectionism. Slowly, steadily, curiously, I started to experience a fullness of being in relationship. Noticing that pain and hurt and sin didn’t have to flatten a friendship, but could in fact round it out.

I have continued to discover that truth in the last 20 years of birthing and nurturing friendships. It is in the exhausting, unpleasant, busted-up places that true friendships are forged. In the dark mines of death and divorce and still births and job loss. When I think about the people in my world who I wouldn’t trade for all the tea in China (and I love tea!), they are people who I have gone hiking with after burying a brother. They are people whose babies I have held as they slipped away in our arms. They are people who called me when their husband left them or when they found out their child was diagnosed with autism. They are the friends who say, “My pain will not exclude you. I am messy, and I open up my arms to ask, ‘Will you walk into my mess with me?’” If I am not willing to do that, then I am not a friend.

Because when you get down to it, that’s all that friendship is: Wide open arms. No dividing line. No front half of the church, better than you, nonsense. Jesus calls me his friend, not because of anything I’ve done, but because he has told me EVERYTHING that he heard from his daddy. (John 15:15). He didn’t stand in the front half of the temple, holding his breath, and passing judgment on the inferior adolescent still lurking inside of me. He simply said, “You’re my friend because I opened my arms, embraced you and told you everything…shared my everything with you.” And because we are his friends he asks us to walk into his mess with him. Into this mess of a world, sharing in the suffering that he has experienced. Loving the messy ones he has befriended.

And after 42 years I can do that. I truly like walking into other people’s messes. I even got a degree to do it for a profession! Give me the mess, and I’ll walk right on in. But the reality is, while that works great in a therapy office, in order for a friendship to work out, it can’t just be ½ the equation standing there with big wide open arms and a target painted on their chest. It takes TWO people, arms outstretched, a capital V for Vulnerability painted on their superhero leotard announcing, “Here I am! Super Messed-Up.!!! Will you keep your arms open, or will you toss me the kryptonite?” 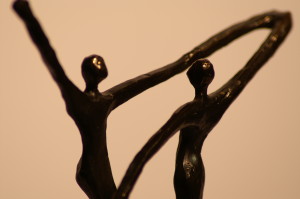 walk into the mess. They have to also be the one who stands vulnerable, arms outstretched, squawking like a baby bird.

And I pretty much hate that part. Sure, I can do it sometimes, at least in the times when my disaster is so big that there’s no way I can keep my arms wrapped around it. (After all, you can’t hide an elephant in your living room). But my struggle is keeping my arms open about the little daily disasters, the messes cluttered in the corners of my heart, the little splinters and paper cuts. I worry that those kinds of messes will be considered insignificant, or silly, or my own fault, or something that isn’t worth the cost of empathy, because I wasn’t supposed to fall into the need of grace in the first place.

I hear the voices saying, “You made your bed so lie in it. Don’t ask me to walk into that pathetic struggle. You’re the “front half of church” girl; aren’t you supposed to be better than that?”

But I’m not. I’m not better than anything. I’m just me. And if Jesus says that he calls me his friend simply because he chose to share everything he knew with me, then what makes me a good friend is simply being willing to share everything I know with the ones who walk beside me with their arms also outstretched in a vulnerable V. Everything. Even the ugly things that no one wants to see in a mirror.

Because in a real friendship there is no invisible line. There’s no front half of church.

There is just the reflection of grace, the looking glass of love.

The vulnerable gift of everything.

*****Take the time to read the thoughts of a friend who is a grace reflector in my life and a wonderful person to share everything with! www.megontap.blogspot.com *******