Grace on a Sugar Cone 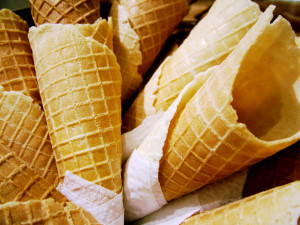 Some people say having kids changes you. But I say that having kids unveils the real you.

Take me, for example. Before I had kids I was patient, kind, magnanimous and upright. After kids I discovered I was selfish, petty and downright ugly. My generous spirit grew weary of well-doing when I actually had to do it well. In fact, I now believe that the concept of “parenting” is God’s idea of a good joke. He lets us think we’re in the position of guiding vulnerable little beings into all knowledge and wisdom, when in reality he is using them to meticulously unfold the truth of our own brokenness. Without my kids, I might still be under the illusion that I was a “good” person. With them, I recognize how desperately I need God’s grace.

I wrote the following about 7 years ago, and my kids are a lot bigger now, but I still think back to this story whenever I have moments of forgetting that grace is absolutely free. When I fail to remember that we can grab hold and devour it with no guilt, shame or self-hatred. Because when we receive grace ravenously, our hearts are enlarged and grace flows right back out of us.

But before moving too quickly into my story on grace, I would like to first address the law. The law demands penalties, and one of the penalties for impertinence in the Reedy household is “losing dessert.” A tragedy on any given day, but made worse one fine Saturday afternoon due to the fact that we were planning a family bike ride to Baskin Robbins for a taste of heaven on a cone.

DJ, my youngest and most recently impertinent son, rode somberly to the store and stood by the door while Dan, Rachel and I taste tested everything from Perfectly Peachy to Jamoca Almond Fudge.  It hurt my mommy heart to watch him gazing down at the floor, sliding the toe of his tennis shoe along the valley of grout between the tiles.

“The law stinks,” I thought. “Maybe today we should order up some grace.”

So, I bought my ice-cream cone, sat down across from DJ and took a few long licks. “DJ,” I finally asked, “Do you know what grace is?” Before he could answer, my vociferous seven-year-old daughter blurted out, “It’s when you get love when you shouldn’t.” DJ nodded in agreement, and I launched into a very eloquent speech about how God’s grace makes us right with him, taking away the punishment we deserve and offering us a brand new, blame-free, shame-free life. As the dramatic conclusion to my monologue I handed over my very own ice-cream cone.

DJ barely even glanced up at me. His grubby little paws reached out for that cone, and before I could blink an eye, he was gobbling it up with a look of upmost serenity and satisfaction. I felt resentment surge up like hot lava. Apparently, he had not received grace in what I deemed an appropriate fashion. Yet, what did I expect? For him to reject the offer? Say he didn’t deserve it? Sit in proud martyrdom and watch me consume the golden egg? Maybe I expected him to well up with tears, mouse-like and trembling as he took the cone, pausing after each lick to stare at me with saintly reverence…too ashamed to freely consume this unspeakable gift.

As I sat there in judgmental resentment, ice-creamless and dejected, God showed up. He smiled patiently and asked if I thought grace came with contingencies. I replied, “Of course not. That’s silly. Grace is a free gift.”  Yet, here I was expecting obsequious belly-crawling. I resented DJ gobbling up that ice-cream cone because he didn’t receive it in a posture of supreme unworthiness. God, however, found nothing wrong with DJ’s receiving. DJ saw grace for what it was. A good thing worth grabbing. So he took it. End of story.

But the story doesn’t end there.

The next morning—a Sunday “hurry-up-and-get-in-the-car-for-church” morning—found 6-year-old DJ dressed and ready and buckled in his seatbelt before I could even begin to holler at him. Shocked, and somewhat alarmed at this drastic change of events, I poked my head in the back door of the van, looked into those beautiful brown eyes and said, “Hey buddy, what’s up? You were so helpful this morning. What’s gotten into you?”

Without missing a beat, he looked up at me seriously and said, “Well, mommy…you gived me your ice-cream.”  Tears welled up in my eyes as I nodded in agreement, “Of course. I gave you my ice-cream.”

And that’s the way the story ends and begins anew. The story of grace turning lives upside down. So, all you moms and dads out there with upside down lives—grab hold of grace. Take the ice-cream he offers, enjoy the sweet flavor of forgiveness, and love him right back in complete surrender.

And since you can never get enough of grace, keep reading! Meg’s blog is up next! www.megontap.blogspot.com