Into the Looking Glass

As a therapist, I believe in the importance of good theoretical knowledge, unconditional positive regard, affective attunement and a safe holding-space, along with perfectly timed insightful observations. But more than that I believe in prayer, because sometimes I am just as baffled as anyone who comes into my office. All the clinical knowledge in the world doesn’t change create.

So I try to spend equal times reading my psychology journals and reaching out to the heavens from which my help comes. The other day, drifting in the delightful worship at the Pasadena house of prayer, I found a particular client coming to my mind, a client who I wish would receive more appreciation from those around them for all the effort they expend even when the outcome of their effort isn’t perfect or even “up to par.” I prayed for a spirit of gentleness and a full measure of grateful appreciation to fall upon the significant others in their life. For their family and friends to be generous with words of encouragement and understanding. And, no sooner were the words released soundlessly into the atmosphere than I felt a pit of angst in my stomach knowing that I might also judge this client’s effort as inadequate if I were an intimate connection. With desperation I realized, I was “one of them.” Yet I knew better. I knew without a shadow of a doubt that my client would flourish if words were spoken over them that bore witness to what they were attempting vs. what they were achieving.

That’s when the piercing of my soul always comes. When I am considering another’s actions. Whether it’s to pass judgment or abound in awe or simmer in silence, suddenly the silver mirror is held aloft and my own little impish face stares back at me. And what I saw in that mirror was that very morning in my very own house. The 43.5 precious minutes I had with my own offspring before they absconded to their houses of tutelage.

Snippets of this morning’s conversation floated out of the mirror as if it was something Dumbledore might have pulled from his Pensieve:

“How long have you been playing on the iPad? Don’t you think that’s too much?”

“Have you done your warm-ups? Use your full belly support when you play. It will make a fuller, rounder sound.”

“Are you on your phone? Aren’t you going to practice your guitar before you leave for school?”

“Who left the cereal bowl in the sink?”

“You can’t blame me that your hair didn’t turn out how you like it! I haven’t done many upside down French braids. Why are you making me feel guilty cause it’s not perfect? Just put it in a ponytail.”

“Why are papers always smashed up when they come out of your backpack? This is a disaster.”

“Did you remember to put on deodorant?”

“Did you pack vegetables in your lunch?”

Ok, I did say other sweet things like, “Good morning, beautiful” and I even snuggled with my Bubba for a couple minutes on the couch. But if we had to do a pie chart of this morning’s communication it would look something like this. 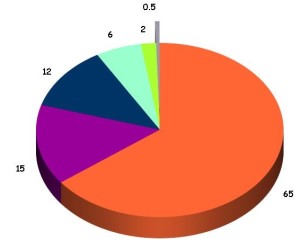 So, staring at that little impish face in the mirror, I was convicted to try an experiment. I’m going to attempt a week of upping the “Hey I think you’re great just as you are!” comments to between 50-70% of my daily communication with my offspring. (I initially thought I was going to shoot for 100%, but I just don’t think I can refrain from asking about deodorant.)

My goals of this experiment will be to notice exactly what effect my increasing appreciation level has on my children’s behavior towards each other, as well as on their state of general well-being. As a secondary inquiry, I will be observing what effect it has on me to speak out goodness rather than “be better”ness.

I’ll try to post regular updates as I’m sure you will be curious as to how this convicting of the soul unfolds.

Okay, I’m a little late in posting this, and a full day has passed since I started my challenge. So far this is harder than I expected. In fact, as soon as I got back from PiHoP, I pulled into the driveway and found my husband exiting the house. It was about 80 degrees out, and he was wearing a t-shirt, a flannel shirt and a thick hoodie. (He had been working in the cool back office all a.m.) And guess what, even after these hours of conviction, the first words out of my mouth were mocking, “Honey, are you sure you’re going to be warm enough? It’s April in Southern California, you might want your ski jacket.” Oops. I recanted, told him of my plan to speak more “Hey, I think you’re great just as you are!” and tried again, wishing him a wonderful afternoon and telling him how much I appreciated how hard he constantly worked for our family.

After my kids arrived home in their famished post-school state, I had to be creative about what I was going to say about dishes left abandoned in various stages of decay. And I discovered that simply saying, “Thanks so much for taking care of your dishes my love!” works as a much better prompt for action than the flustered, fluttery, hand-waving, “Why are these dishes still sitting here???” I did have a brief hijacking when my daughter said, “Mom, I’m going to get to those dishes,” and then walked back into her bedroom and closed the door. I couldn’t seem to hold onto my OCD and gave a bit of a beseeching, “Now? Maybe now?” through the 2 inches of pressed plywood.

My son and I also had a bit of a run in when he failed to express an extreme willingness to practice trombone, and I might have said, “So, I’m spending $240 a month on private lessons for you to sit around and complain? Complain about a blessing other kids only long for in the deep recesses of their soul?” It’s a possibility I said that. And chagrinned, he walked stoop shouldered into the office and began buzzing into his mouthpiece. Of course, there pops up the mirror of conviction, and I walked in and told him, “Hey, buddy, that wasn’t cool. I give you music because I love to give you music. And you practice ALL THE TIME! And you make beautiful music. I am honored to hear you play. Will you forgive me?” It’s amazing that that’s all it took to unstoop the shoulders. Sometimes all it takes is a willingness to look at what is truly good with as equal intensity as what could be improved. Why do I seem to spend more time on improvement than appreciation?

Fortunately, that evening as I continued to hold all of these things in my heart, DJ wrote a wonderful piece of historical fiction on the Black Death complete with a jousting scene with a plagued rider dropping his joust tip down into the dirt which pole vaulted him violently into the crowded stands to everyone’s initial amusement and then horror. He was delighted with his craft, and I was even able to notice how appropriate the font choices was and to agree to help him age the paper in coffee and burn the edges. I went to bed feeling like maybe I had gotten up to about 30% in the “Hey you’re great as you are!” for the day.

I’ve always thought I was a fairly mindful parent, but this communication pie chart rearranging has taken my awareness of my communication to a whole new level. I have been amazed at how much of my conversation at home is directive. That just doesn’t happen in the therapy room, and maybe my home would be a more therapeutic environment if it didn’t happen as much here.

This a.m. I was granted a lot of extra appreciation from my eldest around my willingness to help pack her lunch and provide a “closer to school than usual” drop off. So, maybe, what goes around, comes around.

Looking forward to a day full of encouragement and appreciation.